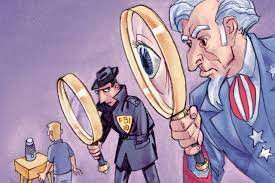 It's not been often, in the five years OffG has existed, that we've had to cop to missing something important within 24 hours of publishing an article – but this is one of those times.

In my article yesterday – "The Storming of the Capitol": America's Reichstag Fire? – I said this [my emphasis]:

Although there is not yet any talk of legislation [in response to the Capitol Hill riots], it's certainly true there are whispers of purges and other measures to "protect the constitution".

That quote did not age well, indeed it was wrong from the moment it went to print. Because, as it turns out, there has actually been "talk of legislation" for weeks – even months. Soon-to-be-President Joe Biden promised a new "domestic terrorism bill" back in November, according to the Wall Street Journal.

That is why you're seeing so much usage of the phrase "domestic terrorism" in the last couple of days. It's the meme-phrase. The primary talking point for this whole exercise. It was underlined in all the memos sent out to all the media outlets.

That's why Joe Biden went to such lengths to distinguish "domestic terrorists" from "protesters" in his speech following the riots.

That's why the Council on Foreign Relations had an interview with a "counter-terrorism and national security expert" published within 24 hours of the incident, in which he spends 4 paragraphs arguing that the people who "stormed the capitol" were domestic terrorists.