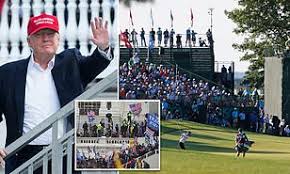 In the first of many cancellations to come PGA will strip Trump Bedminster of 2022 PGA Championship.

The PGA of America will strip Donald Trump of the 2022 PGA Championship, which is scheduled to be held at Trump National Bedminster golf club in New Jersey.

In a blistering column that says the golf world must sever all ties with Trump, Golfweek's Eamon Lynch said the PGA has been debating for two years the need to move the major championship and, once Trump is out of office, will announce the tournament will be played elsewhere.

When historians eventually tally the cost of the Donald Trump era, the manifold indecencies of which culminated in Wednesday's sacking of the United States Capitol during a failed insurrection, golf will not be counted among its casualties.

The game will instead be portrayed as Trump's refuge, something he did while ignoring a pandemic that has claimed 365,000 lives, refusing to acknowledge a resounding electoral defeat, and inciting feeble-minded fascists to violence that left five people dead at the opposite end of Pennsylvania Avenue.