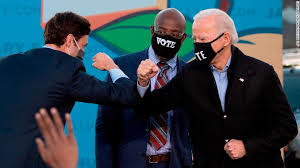 Following the runoff elections in Georgia, Democrats now have 50 seats in the Senate and therefore will set the US political agenda in both chambers. This changes the policy outlook substantially, as it means that President-elect Biden can pass fiscal legislation without Republican support as long as Democrats remain unified. Nevertheless, the incoming administration will face political constraints in such closely divided House and Senate, and practical constraints imposed by congressional procedures.

Below we list some of the most frequently questions Goldman clients have about what life will look like under Democrat control for at least the next two years.

How will President-elect Biden and congressional Democrats govern?

Goldman expects a bipartisan approach, at least at the outset. The most important question regarding the policy outlook over the next year will be how President Biden—along with House Speaker Pelosi and soon-to-be Senate Majority Leader Schumer—balance the political and practical benefits of bipartisan support with the policy benefits of passing legislation even over Republican opposition. Recent events in Washington might increase Democratic interest in finding bipartisan support while also increasing Republican willingness to support aspects of the Biden Administration's agenda, at least in the near term.

One of the first decisions the Biden Administration will need to make is whether to pass some of its major priorities through the budget reconciliation process, which requires only 51 votes in the Senate, or to go through regular order, which requires the support of 60 senators. Congressional Democrats might attempt their first priority—fiscal relief legislation—with bipartisan support.

Why wouldn't Democrats use the budget reconciliation process to do as much as possible from the start?

While the reconciliation process has one major advantage—it allows the majority party to pass legislation without support from the minority—it has several disadvantages.