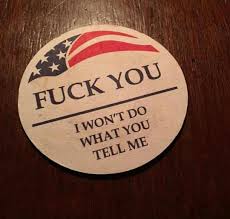 In the name of safety and opposition to terrorism, the government and its vassal states are proceeding apace to un-person any human who desires to be free of the state.

The de-platforming began after the "assault" on the Capitol building in Mordor that provides the offices for the government supremacist reprobates from which all the violent diktats of the state are vomited forth after the usual suspects outside the building have submitted the legislation they wish approved to the moral midgets in the fetid corridors of occupation. A full year of commie devastation by college "educated" Stalinists rioting, burning and destroying government and private property doesn't even match the fury of the political class when their "house" is invaded.

You have entered the Twilight Zone

I suspect the Uniparty will start at free speech and use the Bill of Rights as a mission list to extinguish all freedom in the country.

Glenn Greenwald, as usual, nails it.

Comrade Joe and his jejune co-conspirator in Comrade Commie-la will then proceed to use the "domestic terrorist" label on anyone who either is not compliant to the New Communist Order or ironically enough, apply the label to anyone who objects to the very notion that all government is violence and terrorism in practice by using the time-tested formula of projecting their own vices on thine enemies. Many contend that Joe Hiden is a puppet of the Chinese, a rather silly idea when he can't figure out if the contents of his incontinence diaper is edible or not as the biggest decision in his day. He is a meat puppet.

As my readers know, I have no love lost for the Mango Emperor but I am convinced that the women of both sexes who have lost their minds in the past four years over his occupancy of the Awful Office could not proffer a single objection to policy that doesn't involve the reduction of power of the government versus the plantation dwellers.

"In short, election fraud is so completely a part of the Democratic Party and the left, more generally, and has been for so long, that it would only be remarkable if there were a close election where there wasn't any. We expect it. If we can't easily see it, we expect it to be only because it's a little better hidden than usual.

The Democratic Party is and always has been a party of corruption, heavy on power, short of or bereft of principle. The only difference between it and any given sub-Saharan African kleptocracy is in the shade of skin."