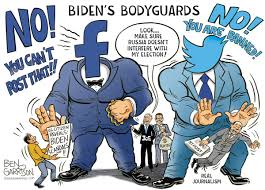 My wife and daughter, normally very active online, were surprised yesterday to discover that they had both been unceremonially booted off of the "social media" entity Twitter. It turns out this morning that they were among four and a half million users to suffer exactly the same fate, including President Trump himself, General Michael Flynn, Sydney Powell, and Lin Wood. Who in his right mind dumps four and a half million customers? No appeals, do not pass go, do not collect two hundred dollars. The great Rush Limbaugh, I'm informed, fired Twitter.

It's bad enough that we have all just suffered through a putrescently corrupt election and a coup d'état that has disenfranchised seventy-five million voters, now we deplorables must be silenced at all costs, as well. I, myself, was grandiosly informed a couple of days ago that something perfectly innocent and truthful I wrote on Facebook several months ago has offended their communist standards and that I will be forbidden, for the next thirty days, to do something on their "platform" that I never do, have never done, and don't really understand. Just who the ever-loving hell do these tiny little men with their smelly beards (and I do include Vijaya Gadde when I say that) think they are?