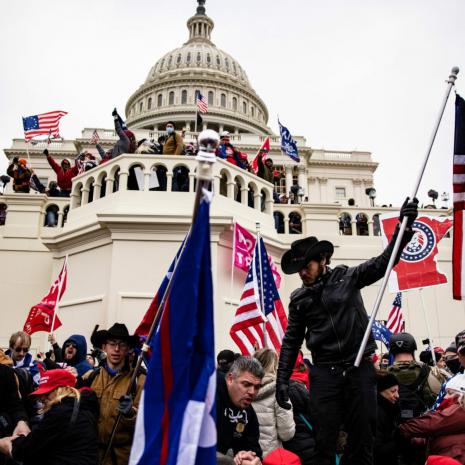 Senate Majority Leader Charles Schumer ludicrously compared the ruckus to Pearl Harbor – a "day of infamy." Schumer complained that the "temple to democracy was desecrated… our offices vandalized" and that rioters were able to "stalk these hallowed halls." Sen. Cory Booker (D-NJ) compared an incursion that broke some windows and furniture with the 1814 British invasion that torched the Capitol.

The pro-Trump mob should not have charged into the Capitol. President Donald Trump should not have fired them up with absurd claims that he won the election "by a landslide." Even conservative firebrand Ann Coulter declared that "it was assholic [for Trump] to tell a crowd of thousands to march to the capitol." Trump lawyer Rudolph Giuliani should never have called for a "trial by combat" when addressing Trump supporters. Once the protestors charged into the Capitol, Trump should have speedily called for an end to the confrontation.

Trump deserves much of the blame for the Capitol chaos. But the debacle would have been far less without blundering by congressional leadership and their small army of protectors. A Washington Post analysis of the "disastrous failure" by Capitol Police noted, "Security at the Capitol building is controlled by Congress itself." The Capitol Police have an annual budget of almost half a billion dollars and two thousand officers – equal to the entire police forces of Cleveland or Atlanta. Video showed police standing back as people thronged inside the Capitol. The Post noted, " One image posted on social media showed an officer taking a selfie with one of the intruders, and a video seemed to show officers opening the security fence to let Trump supporters closer."

Politicians have been tripling the supposed threat they faced every 24 hours since last Wednesday. Rep. Alexandria Ocasio-Cortez (D-NY) said on Sunday, "We came close to half of the House nearly dying" from the attackers. The only person who was shot at the Capitol was a 35-year-old Air Force female veteran who was killed by a Capitol policeman. Fortunately, none of the protestors showed the homicidal intent akin to the Illinois man who shot four Republican congressmen in 2017 with a semi-automatic rifle at a softball field in Alexandria, Virginia. One policeman was killed when he was dragged into a mob and beaten, and a 34-year-old female Trump supporter was reportedly trampled to death in the clash between police and protestors. Another Trump supporter died of a heart attack and another protestor died of a stroke.

Rather than Pearl Harbor or a British invasion, last Wednesday's ruckus was Lese Majeste, complete with a dude dressed like the Grand Poobah from Fred Flintstone cartoons. Many of the protestors looked like people who simply wanted to stomp their feet, shout, and take some selfies to show friends on social media what they did in Washington.