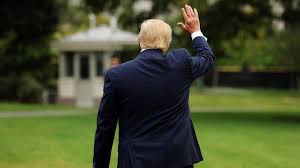 The financial burden that he's inflicted on our government will wreak havoc for decades, saddling our kids and grandkids with debt.

Trump will have the worst jobs record in modern U.S. history. It's not just the pandemic.

The national debt has risen by almost $7.8 trillion during Trump's time in office. That's nearly twice as much as what Americans owe on student loans, car loans, credit cards and every other type of debt other than mortgages, combined, according to data from the Federal Reserve Bank of New York. It amounts to about $23,500 in new federal debt for every person in the country.

The growth in the annual deficit under Trump ranks as the third-biggest increase, relative to the size of the economy, of any U.S. presidential administration, according to a calculation by Eugene Steuerle, co-founder of the Urban-Brookings Tax Policy Center. And unlike George W. Bush and Abraham Lincoln, who oversaw the larger relative increases in deficits, Trump did not launch two foreign conflicts or have to pay for a civil war.

Someone Please Tell Powell, Yellen And Biden That We Are Going To Need A Lot More "Weimar Money