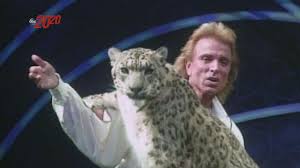 Fischbacher's long-time partner on and off the Las Vegas Strip, Roy Horn, died last year at a Las Vegas hospital of complications from COVID-19. He was 75.

The duo astonished millions with their extraordinary magic tricks until Horn was critically injured in 2003 by one of the act's famed white tigers.

In a statement announcing Horn's death in May, Fischbacher said, "From the moment we met, I knew Roy and I, together, would change the world. There could be no Siegfried without Roy, and no Roy without Siegfried."

He later told Germany's weekly Bild am Sonntag newspaper his best friend would always stay by his side.

"For dinner, I will continue to have the table set for him, too. Like it always was the case. I'm not alone," dpa quoted Fischbacher as telling the newspaper.