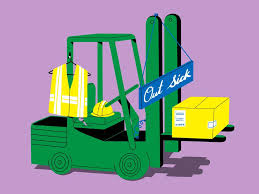 This was the case at Smithfield Foods, Bloomberg notes, where 50 of the company's 2,300 employees have still not returned to work. One worker told Businessweek: "We work so close together. It's like pulling teeth to find out if the person next to you tested positive."

And so while unemployment numbers have been in focus, people calling out sick or taking leaves of absence remain overlooked issues in the labor market.

Even as unemployment numbers continue to look slightly better, the rate of absenteeism is near record highs. More than 1.9 million people in December alone missed work due to illness, the report notes, nearly matching the 2 million person record set in April, during the early days of the pandemic. The absenteeism rate at major corporations has been averaging about 10% over the last 2 months, the report notes. Some corporations have seen numbers as high as 25%.