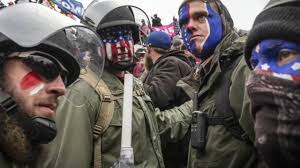 There are still a few days left before inauguration day, but the big threat supposedly was 50 armed events at all state capitols on Jan 17th.

(CNN)The FBI has received information indicating "armed protests" are being planned at all 50 state capitols and the US Capitol in Washington, DC in the days leading up to President-elect Joe Biden's inauguration on January 20, according to an internal bulletin obtained by CNN.

The news comes as security measures are being stepped up ahead of Inauguration Day, …

But who called for an armed protest — a reckless and risky move in the current environment? Not President Trump. The main evidence, apparently, was a flyer that called for an Armed March for 12PM Jan 17th. Was there any other credible threat?

Oddly,  the flyer was issued without any author or organisation.  Warnings went out on conservative sites saying "it's a trap".

An anonymous flyer calling for an armed protest?

Andrea Wideberg: "DO NOT ATTEND.  There is a 99.99999% certainty that this is a trap intended to give Democrats an excuse to destroy the Second Amendment and, quite possibly, to cordon off from society all Republicans and conservatives. Here's the flyer, which we reproduce so that you'll recognize it should you see it.  As you look at it, realize that you are the mouse, and this flyer is the cheese. "

Gateway Pundit also warned against it, and tracked a source (sorta, maybe) to  KennethBrooks1911 on Parler with a hashtag of #boogaloo. A Gateway reader followed the flyer back further and found someone called ""Turtle" at Tree of Liberty who announced the rally fully 2 months ago.