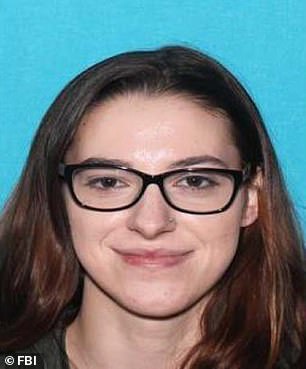 A Pennsylvania woman under investigation by the FBI over claims she stole a computer from House Speaker Nancy Pelosi's office and attempted to sell it to Russia has been charged for her alleged role in the Capitol riots.

Riley June Williams, 22, of Harrisburg, was charged Sunday with entering a restricted building and disorderly conduct after she was filmed rioting inside the Capitol on January 6.

In the affidavit, FBI Agent John Lund said that a former romantic partner of Williams – identified only as W1 – had also come forward to tell the bureau she had stolen either a laptop or hard drive from Pelosi's office during the insurrection.

The witness told investigators that friends of Williams had played them a video that showed her stealing the device.

They further claimed that Williams, a care worker, then 'intended to send the computer device to a friend in Russia, who then planned to sell the device to SVR, Russia's foreign intelligence service.'

However, according to the witness the plan fell through for unknown reasons and Williams is either still in possession of the device or has since destroyed it.

The FBI said the matter remains under investigation as agents work to verify W1's allegations. For now, Williams is just facing charges of entering a restricted building and disorderly conduct.

Williams is believed to be still on the run from police after having allegedly fled from her home when a warrant was issued for her arrest.