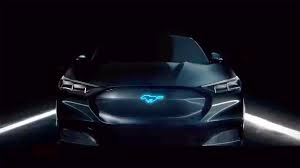 Ford has already launched an all-electric Mustang model, the Mach-E crossover, and while some purists complained that it was blasphemy to do so, most people have really grown to like it, especially those who have driven it. However, we wonder what those same people would say when they hear the rumor that the next generation of the Mustang coupe could only be sold with electric power.

Yes, you read that right: the next-gen Mustang may be going EV. It won't be launched for a few years (it's expected to debut in 2028), but there are rumors that Ford will drop and and all ICE power plants from the Mustang once it does debut.

Autoline Daily was the first to share a report published by AutoForecast Solutions, which claims an all-electric Mustang will go into production in 2028 and that no gas-burning variants will be offered. The Mustang BEV would be built at the Flat Rock assembly plant in Michigan, where the current Mustang is built, so the facility would have to be retooled to be able to handle EV production.