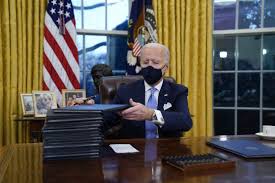 On his first day in office Joe Biden killed off an estimated 52,100 American jobs.
That must be a record, right?

Canceling the Keystone Pipeline costs over 11,000 construction jobs and 42,100 jobs throughout the US during the construction process according to the US State Department.

With the stroke of a pen, Biden has put 11,000 jobs and over $1.6 billion in wages on the chopping block. The kicker, the pipeline's developer has pledged that the project would have zero carbon emissions.