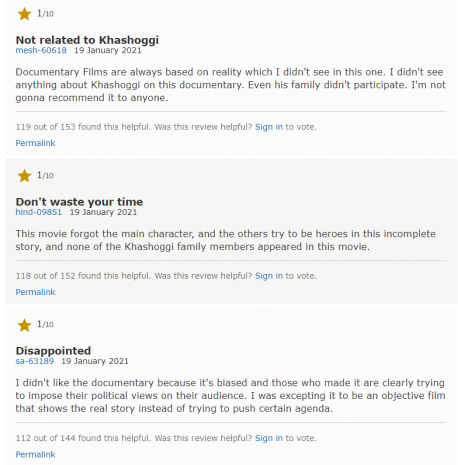 A critically acclaimed documentary about the murder of Saudi journalist Jamal Khashoggi appears to have been the target of a coordinated campaign to post negative comments and ratings.

The Dissident, which was released on 8 January, investigates the brutal murder and dismemberment of Khashoggi, a Washington Post and Middle East Eye columnist who was killed by Saudi agents after entering the kingdom's embassy in Istanbul in October 2018.

The film was directed and written by Bryan Fogel, who has previously won an Academy Award for Best Documentary for his film Icarus, which shed light on state-sponsored doping in Russia.

The Dissident received a standing ovation when it premiered at the Sundance Film Festival last year and has since received universal acclaim from critics.

'Based on recent analysis, it appears that there have been deliberate attempts to manipulate the movie's audience score'

On the popular film review site Rotten Tomatoes, it holds a 97 percent "fresh" rating on the "Tomatometer", based on 57 positive reviews out of 59 aggregated from film critics around the world. Among the site's "top critics", the film received 19 "fresh" ratings, and no "rotten" ratings.