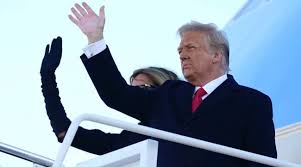 There have been rumors about him starting a new political party, known as the Patriot Party. But, according to one of his key advisors, Jason Miller, Trump plans to focus on something bigger and far more important: election integrity.

Just one day after boarding Air Force One with the Trump family on their venture from Washington, D.C. to Mar-a-Lago, Miller told "Just the News AM" that the former president has a couple of goals over the next few years, including "winning back the House and the Senate for Republicans in 2022 to make sure that we can stop the Democratic craziness."

"You're also going to see him emerge as the nation's leader on ballot and voting integrity," he said.

According to Miller, Trump wants to focus on voter integrity but that work will never take place in Washington, D.C. because Democrats don't believe there is a threat to America's elections. Instead, Trump is likely to work with individual states and state legislatures to create reforms.