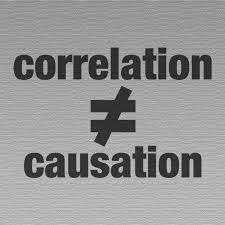 We covered some of the basics of this in Fallacy #3, the questionable cause. Nonetheless, confusing correlation with causation is very common, and so I want to give it some space of its own.

Most typically, correlation implying causation is used to shill for governments or other organs of a long standing (status quo) system. The typical argument goes something like this:

Bob: Our democracy is not something to be worshiped. I'm not sure I want to support it at all.

Alice: So, you want to go back to the old days, when babies were lucky to survive four years!?

What Alice is doing here is implying causation to a government, or model of government. She's claiming that it caused a drop in infant mortality simply by its presence. It didn't, of course; it was thousands of doctors, nurses, researchers and others – over centuries – who finally overcame infant mortality.

Alice's assumption, moreover, is delivered with an accusation: that Bob is endorsing infant deaths. In effect, he is being given a choice: Either endorse the state or endorse dead babies. And this is not too stark a rendering of Bob's choice; the emotional impact Alice produces is precisely that.