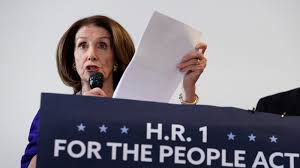 The 1st time this Bill was pushed was back in 2019. It never made it to Congress. NOW, they are re-pushing with all of their new, we've moved to the left, Rupukican jerks. Our Commander - in- thief is expected to gleefully sign it.

Scary Bill. Felons get to vote. 16 year olds (You know Antifa and their ilk)to pre-register @ school. Internet registration with NO ONE ASKING IF YOU ARE AMERICAN. No SS# checks. Nothing.

H.R. 1 reverses the decentralization of the American election process—which is necessary for protecting our liberty and freedom.

Make it easier to commit fraud and promotes chaos at the polls through same-day registration, as election officials have no time to verify the accuracy of voter registration information and cannot anticipate the number of voters, ballots, and precinct workers that will be needed.

Hurt voter turnout through early voting by diffusing the intensity of get-out-the-vote efforts; it raises the cost of campaigns. Voters who vote early don't have the same information as those who vote on Election Day, missing late-breaking developments that could affect their choices.

Degrade the accuracy of registration lists by automatically registering individuals from state databases, such as DMV and welfare offices, by registering large numbers of ineligible voters, including aliens as well as multiple or duplicate registrations of the same individuals.