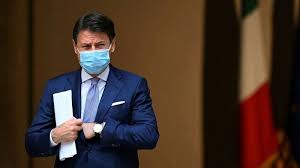 He will stay on in a caretaker capacity while President Sergio Mattarella, the ultimate arbiter of Italian political crises, discusses the next steps with party political leaders, starting Wednesday.

The centre-left coalition that has led Italy since September 2019 was dealt a fatal blow earlier this month by the withdrawal of former premier Matteo Renzi's small but crucial Italia Viva party.

Ahead of a key vote in parliament that he looked set to lose, Conte submitted his resignation to Mattarella, the first step in trying to form a new government with a strengthened majority.

Conte's exit, which follows weeks of tensions between him and Renzi over the government's handling of the pandemic, barely caused a ripple on the financial markets.

But it leaves a vacuum at the top of the eurozone's third largest economy as a major decision looms on how to spend billions of euros in European Union recovery funds.