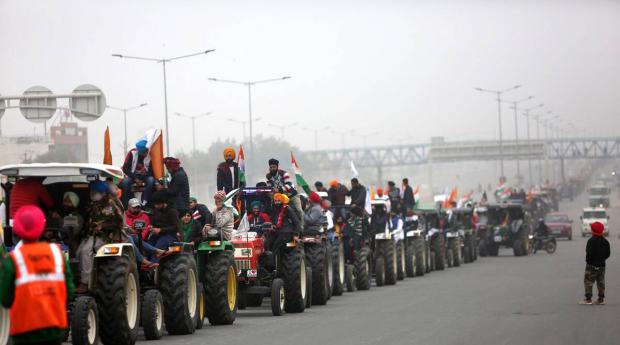 The protesters marched, rode horses and drove long lines of tractors to New Delhi where they stormed the historic site in a symbolic challenge to Prime Minister Narendra Modi's government.

As the country celebrated Republic Day, the farmers waved farm union and religious flags from the ramparts of the fort, where prime ministers annually hoist the national flag on the country's August independence day holiday.

Riot police fired tear gas and water cannons and set up barricades in attempt to prevent the protesters from reaching the centre of New Delhi, but the demonstrators broke through in many places.

People watched in shock as the takeover of the fort, which was built in the 17th century and served as the palace of Mughal emperors, was shown live on hundreds of news channels.

Protesters, some carrying ceremonial swords, ropes and sticks, overwhelmed the police trying to stop them.

The farmers have been protesting for nearly two months, demanding the withdrawal of new laws that they say will favour large corporate farms and devastate the earnings of smaller scale farmers.

The contentious legislation has exacerbated existing resentment from farmers, who have long been seen as the heart and soul of India but often complain of being ignored by the government.