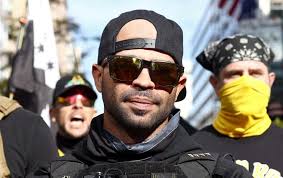 Curiously, Tarrio was ordered to stay away from Washington D.C. one day before the January 6 Capitol riot after he was arrested on vandalism and weapons charges - upon a request by government prosecutors that he be prohibited from attending. At least five Proud Boys members were charged as part of the riot.

In the 2014 hearing, a federal prosecutor, an FBI agent and Tarrio's attorney describe his undercover work - noting that the Proud Boys leader helped authorities prosecute over a dozen people in various cases involving drugs, gambling and human smuggling, accoding to Reuters.

In a Tuesday interview with Reuters, Tarrio denied working undercover or cooperating in cases.

Law-enforcement officials and the court transcript contradict Tarrio's denial. In a statement to Reuters, the former federal prosecutor in Tarrio's case, Vanessa Singh Johannes, confirmed that "he cooperated with local and federal law enforcement, to aid in the prosecution of those running other, separate criminal enterprises, ranging from running marijuana grow houses in Miami to operating pharmaceutical fraud schemes."

Tarrio, 36, is a high-profile figure who organizes and leads the right-wing Proud Boys in their confrontations with those they believe to be Antifa, short for "anti-fascism," an amorphous and often violent leftist movement. The Proud Boys were involved in the deadly insurrection at the Capitol January 6.

The records uncovered by Reuters are startling because they show that a leader of a far-right group now under intense scrutiny by law enforcement was previously an active collaborator with criminal investigators. -Reuters

Did Joe Rogan FINALLY say what we're all thinking about January 6th and the FBI?