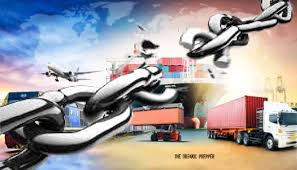 The United States and the world have been suffering under a slow-burning economic depression for three decades now. Although the US began inching slowly out of the clutches of depression under the Trump administration's quasi-Americanist tariff policies, COVID mandates, and the government's war on independent businesses, personal finances, and the economy thrust both the United States and the rest of the world straight back into a financial and economic hole.

This time, however, that hole is much deeper than even the most negative predictions could have foreseen.

While PPE loans, stimulus checks, extended unemployment benefits, and a terrified shut-in population, as well as a mainstream media that peddles nothing but 24/7 propaganda, are hiding the real effects of what has taken place, there will soon be no way to cover up the economic fallout from the Great Reset.

The global supply chain is overwhelmed.

For one example of what is lurking under the surface, an article published in the Washington Post entitled, "Pandemic Aftershocks Overwhelm Global Supply Lines," details the fast arriving price increases, inflation, and scarcity. The article states,

The cost of shipping a container of goods has risen by 80 percent since early November and has nearly tripled over the past year, according to the Freightos Baltic Index. The increase reflects dramatic shifts in consumption during the pandemic, as consumers redirect money they once spent at restaurants or movie theaters to the purchase of record amounts of imported clothing, computers, furniture and other goods.

That abrupt and unprecedented spending shift has upended long-standing trade patterns, causing bottlenecks from the gates of Chinese factories to the doorsteps of U.S. homes.

In other words, money that was once spent on luxuries such as eating out or going to the movies, entertainment, etc. is now being spent on necessities.

The price of everything will continue to rise.

This is, of course, due to the fact that many good jobs were sent overseas already before the COVID mandates took hold but also because the lockdowns and fearmongering of media outlets have now driven many of the businesses that were left into extinction.

How much land do you need to grow all your produce?