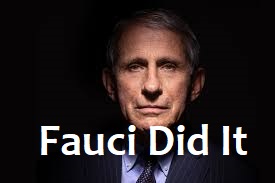 The gain-of-function research that was conducted at the Wuhan Institute of Virology in Wuhan, China was intended to engineer highly contagious viruses "to learn about treatments and vaccines" to understand how to respond to an actual outbreak. The team that made this research possible was America's very own public health experts at the NIAID, led by none other than Dr. Anthony Fauci, the number one expert in infectious diseases and leader of the federal coronavirus task force.
Fauci continued gain of function coronavirus research by secretly subcontracting it

The original gain-of-function research goes back ten years, with a Netherlands study that involved ferrets. The researchers wanted to see if coronaviruses could be genetically manipulated so they could be transferred through the air. After demonstrating airborne transmission with ferrets, the researchers wanted to replicate contagion in humans. This opened up an entirely new, controversial science that involved manipulation in the genetic code of viruses.

It was Dr. Fauci and the NIAID who funded the first ferret study. Ten years ago, Fauci co-wrote an op-ed in the Washington Post praising the research as "a risk worth taking." He wrote, "Important information and insight can come from generating a potentially dangerous virus in the laboratory…"

The Wuhan virologists found that they could force an influenza virus to mutate and spread via aerosol droplets by injecting the virus from one ferret to another. By engineering the most lethal viruses in a laboratory setting, researchers believed they could better understand how to invent treatments and vaccines in the case of a real outbreak.

The Obama Administration put a halt on gain-of-function virology research in 2014, for fear of viruses leaking from the laboratory. This opened up an opportunity for Dr. Anthony Fauci to subcontract gain-of-function research on coronaviruses. Fauci concealed ongoing research through New York's Eco Health Alliance. Dr. Fauci funded a project there to learn about the risk of new coronaviruses, and how they could emerge from wild animals to rapidly infect humans.

Dr. Fauci used the cover of EcoHealth Alliance to subcontract the research to China's Wuhan Institute of Virology. In order to continue receiving money, the head of the Wuhan lab, Dr. Shi Zhengli, reported back to Fauci on the progress they were making on coronaviruses.
Fauci, and the criminal network behind covid-19