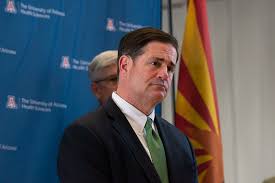 America is an occupied country. Arizona, in particular is under the direct control, through the Arizona's governor's office, of Communist China. The actions of the Governor, Doug Ducey, have put not only his state at risk, but he is threatening the viability of resources and undermining national defense.

Doug Ducey drew the ire of President Donald Trump when he certified his state's fraud-riddled election results on Nov. 30. The governor may be no friend of the president, but he is most assuredly considered a pal by China. Ducey has been listed as a "friendly" in a Chinese think tank's ranking of all 50 governors' attitudes toward China.

In Arizona, the state has a huge water shortage. However that did not stop Governor Doug Ducey from giveing away part of our water rights to Chinea. (AZ Governor) Doug Ducey is keen on selling our nation's precious water resources to the thirsty Asian giant as well. The more one kicks over this rock, the worse it gets. In 2015 Ducey heralded the opening of an Arizona branch office for Aviage Systems, a joint venture aviation firm between General Electric and Aviation Industry Corporation (AVIC) of China. This was to be Aviage's first branch located inside the U.S. From an Arizona Commerce Authority release celebrating the occasion:

"I am thrilled to welcome AVIAGE SYSTEMS to Arizona as it makes its first U.S. expansion that will be key to supporting the company's global growth plans. It's a partnership that makes sense for many reasons: Arizona ranks as one of the United States' largest employment areas in aviation and aerospace systems manufacturing," Governor Doug Ducey said. "We are looking forward to continuing to grow this key sector of our economy, and to helping AVIAGE SYSTEMS grow right alongside us."

AVIC is controlled by the communist Chinese military. President Trump "is close to issuing a list of 89 Chinese aerospace and other companies that would be unable to access U.S. technology exports due to their military ties," Reuters reported in November. AVIC would top such a list.

The plot thickens as Bloomberg reports:

"AVIC is a state-owned conglomerate with 100-plus subsidiaries and more than 450,000 employees. The Trump administration in June put AVIC on a list of companies it said were controlled or owned by China's People's Liberation Army. The firm also runs a civilian business that makes airliners and private jets — some built with parts made by joint ventures with American companies."