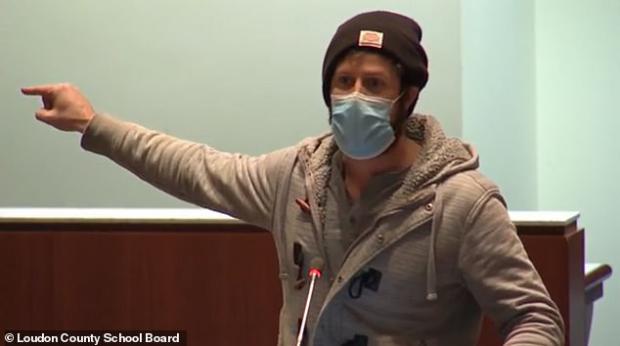 A viral video shows a Virginia father fed up with remote learning unleashing an explosive tirade at school board members and calling for their ouster, unless they agree to resume in-person classes.

The dad's meltdown, reminiscent of fictional news anchor Howard Beale's epic temper tantrum from the 1975 classic Network, took place on Tuesday during the public comment section of a meeting organized by Loudon County School Board.

In the video, which was made public on Twitter on Tuesday, the unnamed parent, wearing a blue surgical mask and a winter hat, steps up to the microphone to weigh in on the debate concerning the reopening to local schools.

'You should all be fired from your day jobs because if your employers knew that you were more inefficient than the DMV, you would be replaced in a heartbeat,' he says in a calm tone of voice.

'I literally just finished a conference call because I'm having to multitask to be here to address you guys. You're a bunch of cowards hiding behind our children as an excuse for keeping schools closed.'

As the father continues to make his argument, he becomes visibly agitated, with his voice rising to a scream.

'The garbage workers who pick up my freaking trash risk their lives every day more than anyone in this school system,' he shouts. 'Figure it out, or get off the podium! Because you know what? There are people like me and a lot of other people out there who will gladly take your seat and figure it out. It's not a high bar. Raise the freaking bar!'