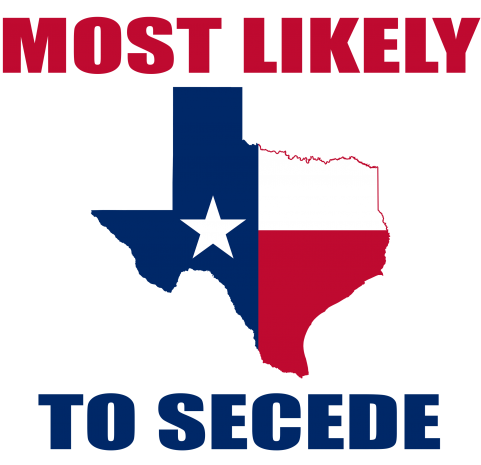 If the voters don't like the Government and have no hope of changing it, they might want to vote themselves a new country.

And so it begins: The Texas Referendum Bill is Official

[Epoch Times] A lawmaker in Texas this week introduced a measure that would allow state residents to discuss, debate, and vote on independence from the United States.

Voters would choose in a referendum on Nov. 2, 2021, whether the state should leave the United States and "establish an independent republic," the act states (pdf).

Joshua Phillips of the Epoch Times is looking forward to the discussion this sparks. And if Texas can't vote itself out, it might still do it with approval from the other states (and there are more Republican states than Democrat ones). Besides, says Phillips, the Democrats might not mind if the giant Texas Electoral College count was rendered moot. The Republicans in the smaller old USA would never win again. (As if they have a chance now?)

The real problem, I suspect, is that other states would rather go with Texas, than the Tech-Oligopoly Lynch Mob, and that will definitely ruin some plans for global dominion.