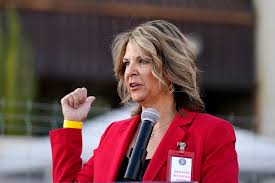 But after Ward was narrowly reelected Saturday to her position leading the beleaguered state party, she is facing questions about the integrity of her own victory.

Sergio Arellano, a Pima County small business owner who lost to Ward by 42 votes, requested a recount of all state party races on Monday, he told The Washington Post. More than two days later, he said, Arizona state party leaders — who report to Ward — have not yet scheduled the audit, which was first reported by the Arizona Republic.

"It shouldn't be a big deal. If her core No. 1 issue is election integrity, then it should be a nonissue," he said in an interview. "It should be transparent, expeditious, and let's move on."

Neither Ward nor Greg Safsten, the Arizona Republican Party's executive director, immediately responded to messages from The Post early Thursday.

Arellano, who served on the advisory board for President Donald Trump's Latino campaign arm, emphasized he does not expect a recount to change the results of his race against Ward. But after dozens of other Arizona Republicans reached out to him to point out potential issues in at least two other races, he said he had to ask for a recount.