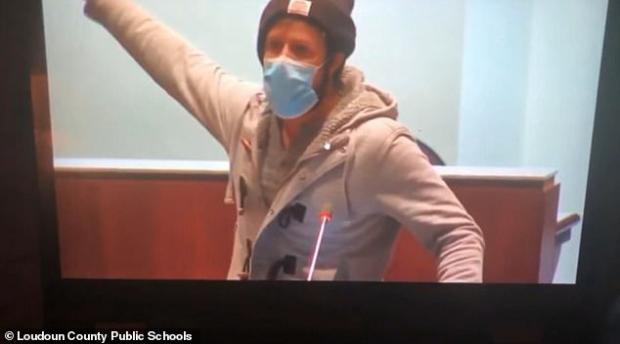 The angry father-of-two who launched a furious rant at a Virginia school board over the plight of his children has told Tucker Carlson about the frustration that led to his angry outburst.

Brandon Michon spoke to the Fox News host after lambasting school bosses who have kept his children out of the classroom since December because schools have been closed due to coronavirus.

In Virginia, schools have been conducting online learning since December 2020, and were also closed from March 2020 until the end of the school year.

Virginia recorded 3,137 new coronavirus cases today among its 8.5m population.  The state has the nation's ninth worst outbreak measured by cases per 100,000 and 6,397 people have died from the virus since the start of the pandemic.

Footage of Michon, whose children are five and eight, raging at members of the Loudoun County school board on Tuesday has since gone viral.

The father-of-two told Carlson he attended school board meetings for months and his 'blood started boiling' during the speech because they had been ignoring parents' concerns.

He said it was essential to get children back in school, because they are 'the most important asset in our life'. Their education is 'all we have to look forward to, because they're going to be taking care of us when we're old', he added.

1 Comments in Response to 'If you're not going to lead, step aside':

Coronavirus has done a wonderful thing for Americans who love their children. It has taken them out of the corrupt public school system, where they are learning more propaganda than they are learning good. Many people want the nanny state to educate their kids as well as babysit them. People need to wake up to what's really going on around them. If you had the kids, bring them up yourself.