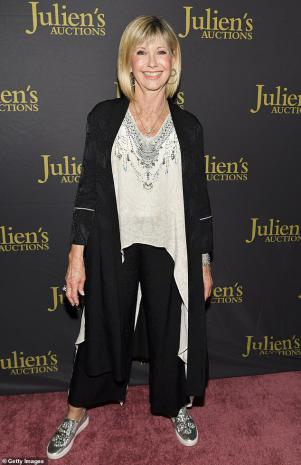 But for 'natural' medicine advocate Olivia Newton-John, 72, getting a jab isn't on the cards.

Speaking to The Herald Sun with her daughter Chloe Lattanzi, 34, on Sunday, the pop icon said she has no plans to get vaccinated against the deadly virus.

While the Grease star provided no further explanation, Chloe was more than happy to share her bizarre and unscientific beliefs about vaccines with the publication.

'I'm not an anti-vaxxer, I'm anti putting mercury and pesticides in my body, which are in a lot of vaccines,' proclaimed Chloe, who runs a medicinal cannabis farm in Oregon with her beau James Driskill.

She went on: 'To me real medicine is what comes from the earth. I think people trust vaccines because the doctor says it is safe, I used to.'

Chloe, who has no medical nor scientific qualifications, claimed that she's 'done research' and now believes vaccines aren't safe.

'If I had a chance to take herbs and plants as a baby rather than have toxins injected into me I would have done that,' she insisted.