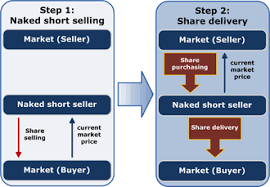 Naked shorting is the illegal practice of short selling shares that have not been affirmatively determined to exist. Ordinarily, traders must borrow a stock, or determine that it can be borrowed, before they sell it short. So naked shorting refers to short pressure on a stock that may be larger than the tradable shares in the market. Despite being made illegal after the 2008–09 financial crisis, naked shorting continues to happen because of loopholes in rules and discrepancies between paper and electronic trading systems.

The above is from Investopedia What is Naked Shorting?

It is illegal to be naked short in excess of float except for market makers who have to take the other side of a trade.

It was not the market makers who were naked short. It could be in theory, but not in this case, at least not yet.

Hedge funds wanted to short and they have to borrow stocks to do so.

The hedge funds get those shares from somewhere. Where? The brokerages and the market makers such as Goldman Sachs.

Coinbase Is Crashing... And Dragging The Market With it