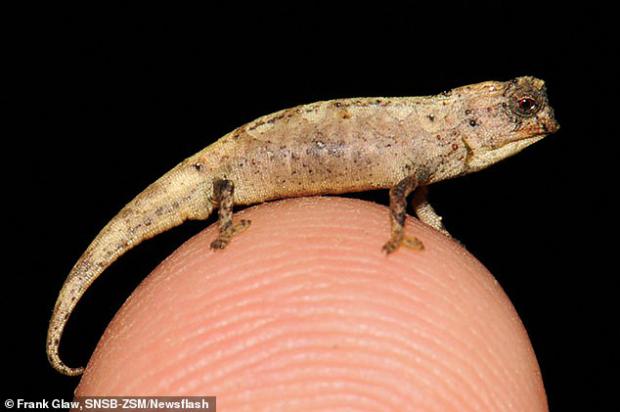 Known as Brookesia nana, or the nano-chameleon, the petite species can perch on a fingertip and may have the smallest adult males of any vertebrate.

The species was discovered in the northern regions of the island of Madagascar. Only two specimens of B. nana have been found so far but, conveniently, it's a male and a female pair. The female has a body length of 19 mm (0.7 in), or 29 mm (1.1 in) including the tail, which is small enough to place it among the smallest known geckos and chameleons.

But the males are even smaller – record-breakingly so. The male B. nana was measured at just 13.5 mm (0.5 in) long, or 22 mm (0.9 in) including the tail. That seems to make it the smallest reptile in the world, just pipping the previous record-holder, the related species B. tuberculata, by around half a millimeter.

Of course, the researchers had to make sure the specimens weren't just juveniles. They performed micro CT scans of the female, and identified two eggs inside her, indicating she was mature. Likewise, the male's genitals seemed to be well-developed, indicating he was also sexually mature.

In fact, that was the one part of its body that wasn't tiny, relatively speaking. The genitals were almost 20 percent of his total body size, which the team says would be needed in order to mate with the significantly larger females.

Exactly why the species is so small remains a mystery, the team says. It may seem to be an example of the "island effect," where animals trapped on small islands tend to evolve smaller body sizes. But, the team says, B. nana is found in the mountains on mainland Madagascar, so that doesn't seem to apply here. Its family tree also raises further questions.