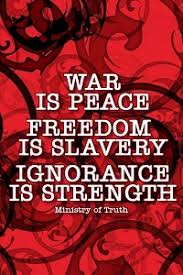 If only they could go on a Public Affairs TV show and politely explain why they are right?

Here's a radical idea — how about holding a press conference to answer all the allegations, hand over the ballot machines, the ballots, and the check the signatures? It would all be so easy. Since they can't do that, and they can't think of any good reasons why they can't do that, it's time for A Reality Czar! Let the good hand of The Government Tell you what the Truth Is.

And who's suggesting it? The Free Press….

The NY Times Wants Biden to Create a 'Reality Czar'

Kevin Roose, a technology columnist for The [New York] Times, writes, "Several experts I spoke with recommended that the Biden administration put together a cross-agency taskforce to tackle disinformation and domestic extremism, which would be led by something like a 'reality czar'."

A Harvard Uni professor on media policy calls for a "truth commission":

One of those experts, Joan Donovan, the research director of Harvard University's Shorenstein Center on Media, Politics and Public Policy, even implied that the new administration could set up a "truth commission," similar to the 9/11 Commission, to investigate the planning and execution of the Capitol siege on Jan. 6.

"Get the F**k Out of New York!": BLM Protesters Demand White Restaurant Owners Leave the C

The Great Reset Morality: Euthanization of the Inessentials

Biden to America after Floyd verdict: 'We can't stop here'

How L.A.'s Brentwood School Became a Battleground in the Culture Wars