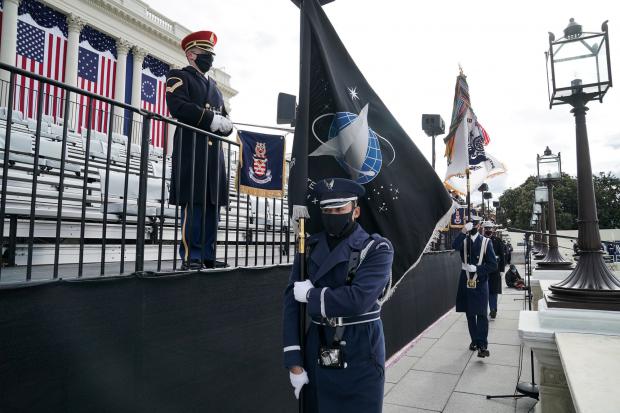 White House spokeswoman Jen Psaki told reporters during a Feb. 3 briefing that the new service has the "full support" of the Biden administration.

"We're not revisiting the decision," she said.

The U.S. Space Force has been a notorious and controversial presence in U.S. politics since 2018, when then-President Donald Trump took on the new military branch as a pet project.

Although the idea of a separate service for space originated in Congress and developed bipartisan support, Trump's involvement in its establishment — which included his campaign selling Space Force-branded merchandise and recommending that his wife, Melania Trump, design the uniforms — made it a pop culture punching bag, as exemplified by the Netflix comedy series "Space Force."

Psaki was asked during a Tuesday press briefing whether the Biden administration would ultimately seek to abolish the new space service, which was formally signed into law in December 2019.

"Wow, Space Force. It's the plane of today," she said, referencing previous questions about the Air Force One's paint job.

"It is an interesting question," she added. "I am happy to check with our Space Force point of contact. I'm not sure who that is. I will find out and see if they have any update on that."

"The Party Does Seem Like It's Over": Biden Tax Plan To Hit Tech And Pharma Hardest

Dick Morris: Biden's "Infrastructure Bill" Is a Lie It's a Ploy to Collectivize th