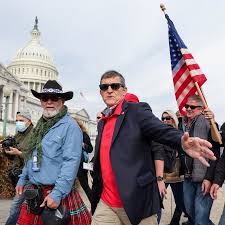 As if he cared.

Where others see disgrace, Mr. Flynn, 62, has found redemption. Recast by former President Donald J. Trump's most ardent supporters as a MAGA martyr, Mr. Flynn has embraced his role as the man who spent four years unjustly ensnared in the Russia investigation.

He was one of the most extreme voices in Mr. Trump's 77-day push to overturn the election, a campaign that will be under scrutiny as the former president's second impeachment trial gets underway next week. Mr. Flynn went so far as to suggest using the military to rerun the vote in crucial battleground states. At one point, Mr. Trump even floated the idea of bringing Mr. Flynn back into the administration, as chief of staff or possibly F.B.I. director, people familiar with the conversations told The New York Times.

And now, safely pardoned and free to speak his mind, Mr. Flynn has emerged from the Trump presidency much as he entered it — as the angry outsider who pushes fringe ideas, talks of shadowy conspiracies and is positioning himself as a voice of a far right that, in the wake of the Capitol riot, appears newly, and violently, emboldened.