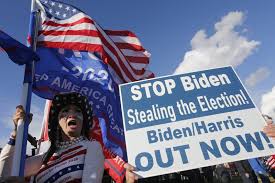 In Michigan the state attorney general is attempting to debar attorneys who represented cases of electoral theft. Massive effort was made—including an orchestrated "storming of the Capitol"—to insure that the evidence would not be presented and that the majority of the population would never encounter the evidence.  The presstitutes from the first instance declared continuously with one voice "there was no vote fraud," "baseless claims of vote fraud," and the old standby "conspiracy theory."

Obviously, if there was no fraud, there would have been no danger in examining "baseless claims."  Their baselessness could simply have been demonstrated.  If the claims of electoral fraud are baseless, there was no need to spilt the country and to cause half of the voting population to distrust the public institutions that are supposed to uphold election integrity.

Even without hard evidence of a stolen election, it is obvious that Trump did not lose to Biden who inspired no enthusiasm and whose campaign events had to be halted due to non-attendance. How did Trump lose the election when on December 29, after two months of his heightened demonization following the November 2020 election, he won the annual Gallup survey as America's most admired person, ending Obama's 12-year run. According to the official vote count, Trump received 11 million more votes in 2020 than the number he won in 2016 and three times the black support. In 2020 Trump received 8 million more votes than Obama received in 2012 and Hillary received in 2016.  It is not possible that this extraordinary performance is a losing one.  And this is his official vote count, not his suppressed actual vote.