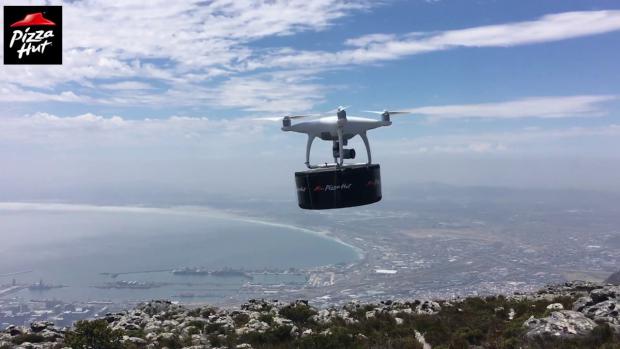 Companies from Amazon to UPS to Walmart and others are quickly working to pilot test drones for last-mile deliveries, with the hope that one day these autonomous aerial vehicles will be embedded in their supply chains to create higher efficiencies.

The topic gains further significance in Israel, where Pizza Hut will pilot test drone deliveries in June. The company partnered with Dragontail Systems where the tests will be conducted at a single store in Bnei Dror.

According to WSJ, Pizza Hut Israel won't be flying pizzas directly to customers' homes but instead will drop them off at government-approved hubs, such as ones that could be designated in parking lots. Delivery drivers will be able to retrieve the pies from the drone and complete the delivery's final stretch.

"Drone delivery is a sexy thing to talk about, but it's not realistic to think we're going to see drones flying all over the sky dropping pizzas into everyone's backyards anytime soon," Ido Levanon, CEO and director for Dragontail Systems, which will be handling the drone trial, told WSJ.

During the test, the country's Ministry of Transportation has allowed an "air bubble" measuring 50 square miles north of the country, where the Pizza Hut drones can safely operate.

WSJ noted that Pizza Hut's Bnei Dror store will be armed with a fleet of drones that could serve up to 7,000 additional households.