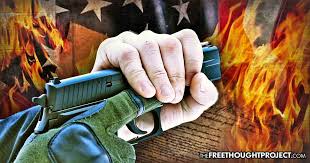 Last week, the Free Thought Project reported on HR 127, the most tyrannical gun bill ever proposed. The bill would target the poor by forcing citizens to pay $800 per year to possess firearms that they are required to register. It also bans multiple legal guns and ammo types, turning tens of millions of Americans into felons over night. While this bill is, without a doubt, the worst gun bill in history, it didn't lay out any guidelines for violating a citizen's Fourth Amendment right. Next month, however, the Supreme Court will be considering exactly that — can cops enter a home to seize guns without a warrant?

In March, the Supreme Court will hear the case of Caniglia v. Strom, which asks the question of whether the "community caretaking" exception to the Fourth Amendment's warrant requirement extends to the home.

The community caretaker exception, has already been recognized as an exception to the Fourth Amendment by the United States Supreme Court. In Cady v. Dombrowski, 413 U.S. 433 (1973), the United States Supreme Court held that police officers did not violate the Fourth Amendment when they searched the trunk of a car that had been towed after an accident.

1 Comments in Response to Supreme Court to Decide if Police Can Warrantlessly Raid Homes...

Here are some points SCOTUS will have to consider. 1) A citizen of the US is not a man/woman. Rather, the citizen is paperwork. If the man/woman stands in his/her man/woman capacity as owner of any property, the government is hands off. 2) The man/woman must stand in his/her man/woman capacity, not only think that he/she is doing so. The stand might have to be made by saying it directly. How many people know how to stand as a man/woman - not a citizen - and call their gun property rather than a gun? 3) Bills have tricky wording. Often the intent of the bill-maker is different than what the bill says, and he doesn't even realize it. SCOTUS will need to take the Bill wording into account with regard to whether or not it says/implies "citizen," or only "man/woman."