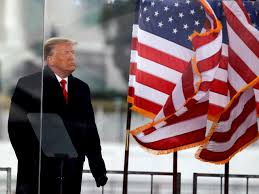 The big day has finally arrived: After weeks of lead-up, the first session in Trump's impeachment trial will feature presentations from both sides over the Senate's authority to hear the case, followed by a vote on the matter, which would require a simple majority, and is expected to pass in the Democratic-controlled chamber.

As many as five GOP senators, including Sen. Mitt Romney of Utah and Sen. Susan Collins of Maine, previously sided with Democrats on a question regarding the constitutionality of trying the former president, however at least 17 Republicans will need to join all 50 Democrats to reach the 67 votes required to convict Trump.

"Presidents do not get a free pass to commit high crimes and misdemeanors near the end of their term," impeachment managers argued in a brief last week, regarding their contention that Trump incited the Jan 6. Capitol Riot, during which a small group of Trump supporters walked through an open door and 'stormed' the Capitol complex.

On Monday, Trump's lawyers said the president didn't incite the crowd and that the rioters who breached the Capitol "did so of their own accord and for their own reasons," adding that Trump used the word "fight" a "little more than a handful of times and each time in the figurative sense," making no explicit mention of rioting. Defense attorneys added that the president was exercising his First Amendment rights.