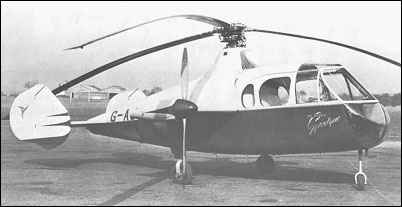 They're not as sexy as something like the Lilium jet, with its banks of tiny ducted fans. But as Horizon's Brandon Robinson pointed out in our recent interview, the smaller the fan, the higher the power draw. Gyrodynes use big rotors. Really big ones that are completely unpowered during horizontal flight. And while they look dorky and old-school next to some of the alien spaceship designs we've been seeing lately, they offer some very serious advantages over planes, helicopters and multirotor eVTOLs.

A gyroplane is an airframe with a large, unpowered top rotor and a secondary rotor to provide forward thrust. Get it moving forward, and the top rotor begins spinning and developing lift, enough to fly on. A gyrodyne is very similar, but adds the ability to briefly pre-rotate and power the top rotor for vertical takeoff and hover capability.

They're not new. The gyrodyne was first conceived back in the 1930s in the UK, and the Fairey Rotodyne was flying by the 1950s, promising an inter-city VTOL skybus service faster than a helicopter and more flexible than a plane. But the Fairey design powered its top rotor with "tip jets," each applying a thousand pounds of force at the ends of the rotors. And while they only fired for a couple of minutes during takeoff and landing, they were reportedly loud enough to stop a conversation two miles away. The idea didn't take off, as it were.