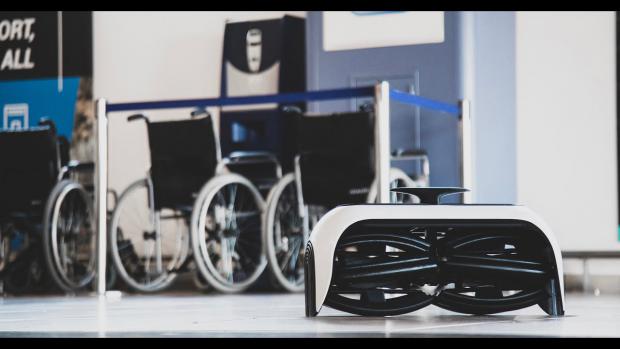 The wheel itself features a central hub, six folding aluminum structures that take the place of traditional spokes, and an aluminum rim that's divided into six interlocking sections – each of those sections is clad in a length of foam-filled tire.

A locking mechanism in the hub keeps the whole thing securely in the form of a conventional wheel, when it's in use. Once it's time to stow the wheel, though, a release of that mechanism allows the two sides of the hub to spread apart from one another, so the "spokes" and rim sections can be folded down and stored between them – sort of like the ribs of an umbrella.

The resulting package, which is definitely more compact than a regular wheel, could best be described as a cylinder that bulges out in the middle.

Mocellin's latest invention, the Revolve Air wheelchair, incorporates two such 24-inch wheels joined side-by-side along a shared axle. A capsule-like component houses both wheels when they're folded down. When it's time to use the wheelchair, the capsule is removed, the wheels are opened up, then the capsule is placed back onto their axle, where it serves as the seat. A telescoping frame with a small set of front wheels on the end then folds down from the underside of the seat/capsule.

According to Mocellin, the Revolve Air can be folded and unfolded in about the same amount of time as is required for a traditional folding wheelchair. Unlike them, however, its size is reduced by 60 percent when folded. This means that it could easily be brought aboard aircraft and stored as overhead carry-on luggage. It could likewise be carried aboard trains and buses, or tossed into the back of a compact car or a taxi.