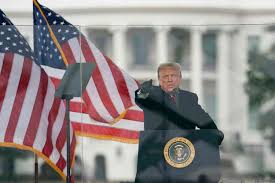 (Natural News) A lawyer for former president Donald Trump has said that his defense will show videos of Democrats encouraging violence at his Senate impeachment trial.

Attorney Bruce Castor told Fox News' Laura Ingraham that they would be presenting videos showing Democratic Congress members calling for violence against officials with the Trump administration and law enforcement.

These clips will counter videos the Democrats are expected to show of the rioting at the Capitol as well as the speech Trump gave at a rally prior to the January 6 attack.

House Democrats have charged Trump with inciting violence by claiming election fraud and urging his supporters to protest at the joint session of Congress certifying the results of the election. They claim that he mobilized his voters to make the attacks.

Ingraham asked: "Will you then respond with Maxine Waters, a number of other Democrat officials not speaking out about the Antifa and other extremist rallies over the last summer?"

Rep. Waters (D-Calif.) called on supporters at a 2018 rally to confront Trump officials publicly in protest of the administration's child separation policy.

"I think you can count on that," Castor replied. He also mentioned that there is footage of "cities burning, and courthouses being attacked, and federal agents being assaulted by rioters in the streets, cheered on by Democrats throughout the country," a likely reference to the continued unrest in Portland, Oregon.

The legal team has also pointed to a statement made by House Speaker Nancy Pelosi at a news conference in 2018 about the Trump Administration's immigration policy. On that occasion, she said: "I just don't even know why there aren't uprisings all over the country. Maybe there will be."