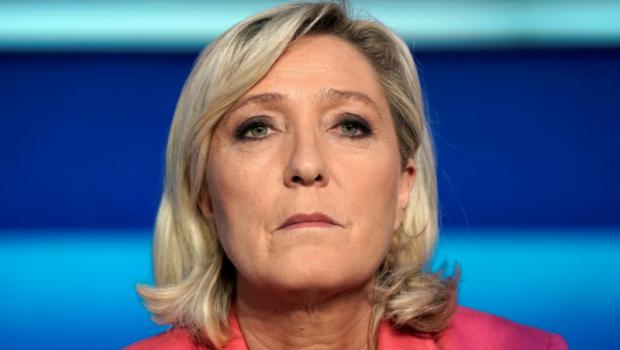 French far-right presidential hopeful Marine Le Pen has denied breaking hate speech laws by tweeting 'monstrous' pictures of ISIS atrocities in a trial she slammed as a politically motivated attempt to silence her.

The leader of the National Rally party appeared in a Paris court today after she was accused of spreading hate by publicising the images of James Foley, an American journalist who was murdered by the terrorist group in 2014.

The trial comes as opinion polls suggest she is one of the most popular politicians in France and will go head-to-head with President Emmanuel Macron in the 2022 poll to choose a new head of state.

The far-right leader caused outrage by publicising the images in 2015, soon after a series of devastating al-Qaeda and Islamic State attacks on Paris.

She tweeted the decapitation photo of Foley under the caption 'This is Daesh' - an Arabic acronym for ISIS – along with another of a man on fire in a cage, and an ISIS victim being crushed by a tank.

'I am obviously the victim of a political trial,' Le Pen, 52, told journalists today at the courthouse in Nanterre, a Paris suburb.

'The media published them, editorialists, newspapers, TV channels, and nobody was ever prosecuted for doing so - only Marine Le Pen is being prosecuted,' she said.

The Chauvin Appeal: How The Comments Of The Court & The Prosecutors...