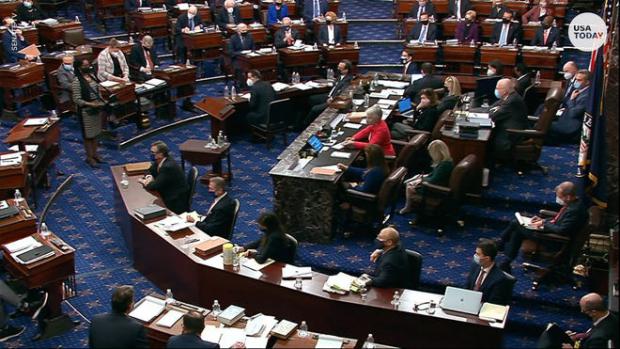 The House managers may be playing into that very danger by selecting some managers who have been criticized in the past for their own over-heated political rhetoric. As managers were replaying the comments of former President Donald Trump from prior years to show how his words fueled divisions, critics were pointing to similar statements from the managers themselves.

Rep. Jamie Raskin, D-Md., the leading impeachment manager, was chided for using "fight like hell" in a 2019 interview with The Atlantic — the very words replayed repeatedly from Trump. He also used that phrase repeatedly in prior years to ramp up his supporters in fighting for Democratic control of Congress.

Speaker Nancy Pelosi blundered by appointing managers like Eric Swalwell who is notorious for his inflammatory rhetoric, in a trial where such rhetoric would be the focus of the managers. Swalwell's comments not only include disturbing legal claims, but highly personal and offensive remarks like mocking threats against Susan Collins, R-Maine. Swalwell declared "Boo hoo hoo. You're a senator who police will protect. A sexual assault victim can't sleep at home tonight because of threats. Where are you sleeping? She's on her own while you and your @SenateGOP colleagues try to rush her through a hearing." Pelosi picked not only a member who has viciously attacked Republicans but one of the Republicans most needed by the House in this trial.

If this trial boils down to irresponsible political rhetoric, the public could find it difficult to distinguish between the accused, the "prosecutors" and the "jury." That is the problem with a strategy that seems focused not on proving incitement of an insurrection but some ill-defined form of political negligence.