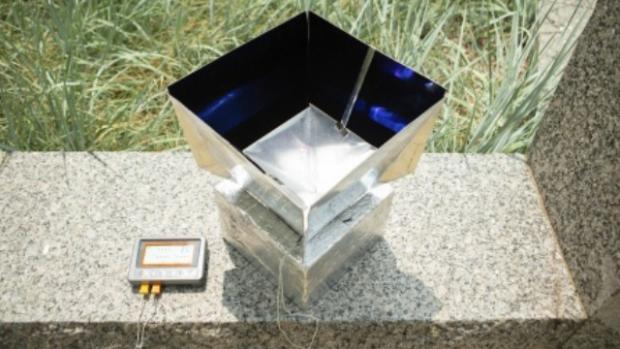 Now, researchers at the University at Buffalo have developed a prototype hybrid device that can not only cool buildings drastically without using electricity, it can capture solar energy to heat water.

Created in many forms over the years, radiative cooling systems absorb heat from inside a room or building, and emit it in infrared waves towards the sky. At those wavelengths, the Earth's atmosphere is "invisible" to the radiation, meaning there's nothing stopping the heat from venting directly into the cold of outer space.

These devices use panels made of materials that can absorb and emit the heat. The logical way to orient these thermal emitter panels is to have one face pointing towards the sky, like a solar panel, but the team on the new study says that's not the most efficient method. The panels emit heat from both sides, so in that position some of the heat is being emitted back towards the ground.

So for the new design, the Buffalo researchers moved the thermal emitter so that heat could be collected from both sides and transmitted into space. To do so, they positioned the thermal emitter vertically, between a pair of mirrors arranged in a V shape. Those mirrors then reflect the infrared waves up into the sky.

"Since the thermal emission from both surfaces of the central thermal emitter is reflected to the sky, the local cooling power density on this emitter is doubled, resulting in a record high temperature reduction," says Qiaoqiang Gan, lead author of the study.