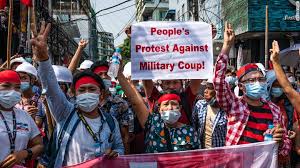 On Sunday night—Monday morning in Burma (or Myanmar)—the Tatmadaw, or military, long noted for its venality and brutality, staged a coup. Troops detained Aung San Suu Kyi, the country's informal head of government, along with other leading members of her party.

Deploying standard State Department-speak, Secretary of State Antony Blinken announced: "The United States stands with the people of Burma in their aspirations for democracy, freedom, peace and development. The military must reverse these actions immediately."

Then, apparently recognizing that the latter wasn't likely to happen, the White House promised to "take action against those responsible if these steps are not reversed." This became the first order of business for the Biden administration when Washington got back at work on Monday morning.

In reality, however, there is little that the U.S. can or should do.

For What Should We Fight Russia or China?