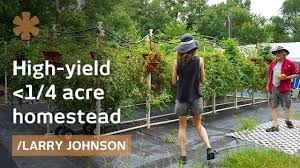 Former Army tech Larry Johnson has spent his career improving computer and telephone systems so when he saw inefficiencies in how we grow our food, he decided to create a new system for farming your yard. His EZGro garden uses aquaponics, stacked towers, and custom pots to create a high-density vertical garden (HDVG) on as little land as a deck, rooftop, or parking space.

Johnson says the system will grow 700 plants, using 15 towers, in a space of just 2 by 18 feet. Today, he sells kits ranging from single tower patio gardens to 10-tower deck gardens to commercial-sized set-ups like those being used by a Miami football stadium for concession meals, by a Whole Foods Market in New Jersey, and by rooftop farmers in Lagos, Nigeria.

It all began in 1995 when Johnson began tinkering with his quad pot design, crafting a custom container strong enough to hold tomato plants with over 100 pounds of fruit. He then developed an irrigation system that feeds nutrient-rich water from the top of the towers, drips through the pots, and filters out through tubing below to be reused. This closed-loop system uses less than 10% of the water of a traditional garden.