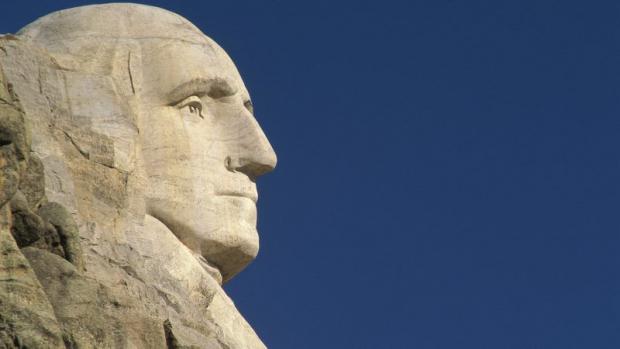 Ah, Presidents Day: a much-needed moment to slow down and commemorate presidents past and present, because we definitely don't have enough of that in this country.

Walking around Los Angeles, you'd be hard-pressed not to pass someone sporting BIDEN-HARRIS merchandise—a shirt, a bumper sticker, a sweatshirt, a mask. Back where I grew up in Virginia, the same is true, though they have a different hero: For years, "MAKE AMERICA GREAT AGAIN" adorned the lawns, cars, and hats of those who wanted you to know they stood, and perhaps still stand, with former President Donald Trump.

That's not news. Public displays of affection for the U.S. president have become standard in everyday American life, extending well past election cycles and rock-concert-esque inaugurations, as if who you voted for is a personality trait. That's the conventional wisdom, it seems. So, on this fair Presidents Day, a reminder: Presidents aren't saints. They aren't monarchs. They aren't celebrities. And they aren't your friends! The executive leader is an employee of the country—someone whose job was, and still should be, limited in size and scope.

It has become something decidedly different over the years, with each president becoming more powerful than the next. That maybe explains, to some degree, why the political fangirling has grown in tandem. Though I can't step back in time to the 18th and 19th centuries, I would venture to say Americans weren't donning shirts with presidents' faces or branding horse-drawn carriages with the names of current and erstwhile U.S. leaders. Nor do I think former President George Washington, whose birthday serves as the inspiration for this holiday, would have wanted that sort of hero worship, when considering that the bedrock of America's founding specifically sought to create a new order—one without a king or king-like figure.

The Mark Of The Beast Runs Through The Church