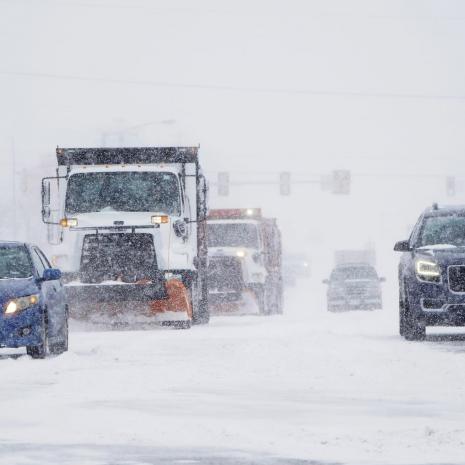 The brutal winter storm that is currently hitting the US has sparked an energy crisis with the cold blast freezing natural gas pipelines and wind turbines - as electricity and oil prices surge to record highs and about five million Texas homes are plunged into darkness with rolling blackouts.

The rare deep freeze continues to wreak havoc on the energy industry with Texas oil wells and refineries halted and restrictions enforced on natural gas and crude pipeline operators.

Suppliers from Texas to North Dakota have now also been forced to impose unprecedented rolling blackouts because of higher power demand in a bid to prevent the collapse of their networks.

In Texas, wind turbines - which account for a fifth of the state's energy - have frozen solid and contributed to the state's power woes as temperatures plummet to a bitter -20F.

More than 4 million people in the Lone Star state were without power overnight and many residents took desperate refuge in their cars for warmth as their homes turned to ice blocks. Power outages were also reported in Kansas, Missouri, Arkansas and Louisiana.

'I've been following energy markets and grid issues for a while, and I cannot recall an extreme weather event that impacted such a large swath of the nation in this manner — the situation is critical,' Neil Chatterjee, a member of the US Federal Energy Regulatory Commission, told Bloomberg.

The current crisis started to unfold when freezing temperatures that started at the beginning of the month sent prices for heating fuels, including oil and natural gas, surging higher.

The rapidly dropping temperatures resulted in gas pipelines seizing up, wind turbines freezing and oil wells shutting. It occurred at a time when demand for heating - from households and businesses - surged to record highs.