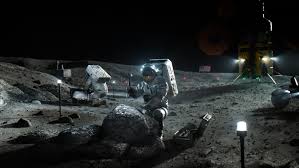 On the same day that Joe Biden obtained the Electoral College majority needed to become president of the United States, a metallic asteroid roughly half the size of New York City made its closest approach to earth. Far from indulging in apocalyptic visions of cosmic destruction, mining company executives like Bob Goldstein of US Nuclear Corp. were seeing dollar signs. Somewhere in the ballpark of $10,000 quadrillion of them in fact.

Goldstein and others in the resource extraction industry have been salivating over these otherworldly mineral prizes ever since Barack Obama signed the U.S. Commercial Space Launch Competitiveness Act into law, which grants U.S. citizens the right to own resources mined in space. The bill, introduced and co-sponsored exclusively by Republican Congressmen, was passed by a unanimous vote in 2015.

Praised as a "landmark for American leadership in space exploration" by Congressman Bill Posey (R-FL), the Space Act of 2015, as it is also known, has elicited all manner of effusive reactions from private sector space industry giants like Planetary Resources, which had already struck a deal with Bechtel Corporation in 2013 to mine asteroids. Planetary co-founder Eric Anderson declared that the legislation was nothing less than a "major step toward humanity becoming a multiplanetary species."