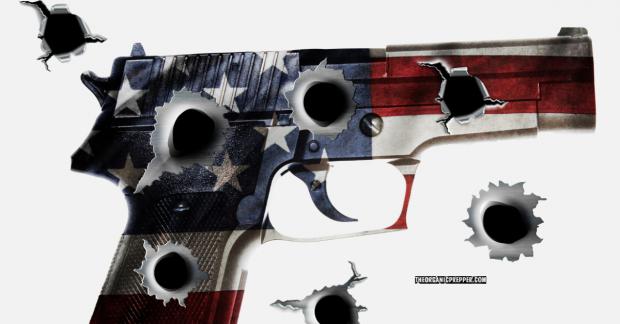 Congress and the White House (currently, perhaps the most anti-Second Amendment collection of politicians ever to grasp the reins of power) are now pushing several bills to dismantle the right to keep and bear arms.

"A well regulated Militia, being necessary to the security of a free State, the right of the people to keep and bear Arms, shall not be infringed."

One new piece of legislation submitted by Sheila Jackson Lee HR 127 is being called "insanity on steroids" by the Citizens Committee for the Right to Keep and Bear Arms.

"Over the years," said CCRKBA Chairman Alan Gottlieb, "we've seen some astonishingly bad legislation originate on Capitol Hill, but this one takes the term 'abomination' to an entirely new level. One look at this bill and you wonder whether Congresswoman Jackson Lee ever heard of the Bill of Rights, which includes the Second Amendment."

Things were bad enough with the bills Congress attempted to push through when President Trump was in office but this takes things to an entirely different level.

If passed, HR 127 would ban some common types of ammunition and "original equipment magazines" for most firearms. Also, it imposes a punishing licensing and registration scheme.

Ban common types of ammunition, which would include every shotgun shell that is larger than a .410. The bill actually states, "It shall be unlawful for any person to possess ammunition that is 0.50 caliber or greater." The punishment? A fine of at least $50,000 and imprisonment of at least ten years. So say goodbye to your 12 gauge and many other forms of shotguns.

Force Americans to give up hundreds of millions of firearm magazines. Of course, they won't even be compensating you for doing so. The bill states, "It shall be unlawful for any person to possess a large capacity ammunition feeding device." It then defines "large capacity ammunition feeding devices" in a way that includes those "that can be readily restored or converted to accept, more than ten rounds of ammunition," except for .22 rimfire magazines. According to industry figures, there are more than hundreds of millions of 11+ round magazines. Like the ban on shotgun shells, the bill would ban these magazines retroactively, with no compensation for items that MUST be turned in.

Require the federal government to register around 400 million guns in America in about three months. The bill says that the registration information would have to be provided to the BATFE (Bureau of Alcohol, Tobacco, Firearms, and Explosives) "in the case of a firearm acquired before the effective date of the section, within three months after the effective date of this section."

Require the firearm registry database to be available to "all members of the public" and "all branches of the United States Armed Forces," among many others. According to the NRA, that would facilitate private discrimination against gun owners, including in such things as employment and access to essential services such as banking, insurance, or housing. It is also interesting to note that the US military (which is prohibited by law from engaging in domestic law enforcement) is listed as an agency that would take an interest in knowing who owns these firearms and where they are.

Retroactively criminalize firearm ownership by young adults. As it currently stands, there are no federal laws prohibiting firearm ownership by adults over 18. This bill would require a license to possess any firearm, and those licenses could only be obtained by those who are 21 or older.

Discourage voluntary mental health treatment. The bill permanently bans license issuance to anyone who "has been hospitalized . . . with a mental illness, disturbance, or diagnosis (including addiction to a controlled substance . . . or alcohol)." Anyone who has a "brain disease" would also be banned from receiving a license. "Brain disease" includes brain cancer, epilepsy, and Parkinson's Disease.

Require the firearm licensee to pay a tax, aka "government insurance," for around $800 a year.

Require license applicants and other household members to undergo a psychological evaluation, which would be paid for by the applicant.

And that's not all.

In addition to HR 127, there is a host of other gun control or gun control-related bills being submitted by the new House of Representatives.