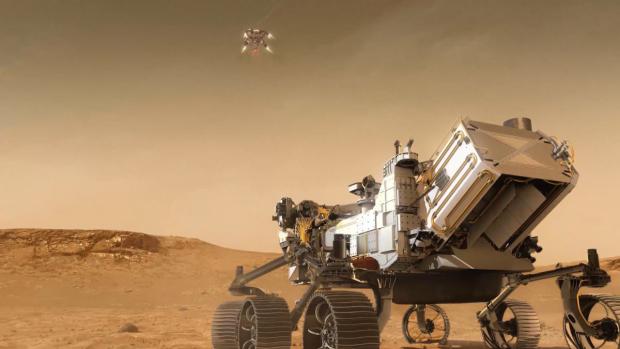 NASA has released new images of the Perseverance rover on Mars, including a shot taken during the 'seven minutes of terror' when it endured tumultuous conditions that battered the craft as it entered the Martian atmosphere and approached the surface.

The $2.2.billion rover touched down on the Martian surface Thursday following a 239 million mile journey and scientists say it is 'doing great and is healthy on the surface, and continues to be highly functional.'

'The moment that my team dreamed of for years, now a reality. Dare mighty things,' the Perseverance team tweeted as it shared the image on Twitter.

The image also captured the dusty and rocky Mars surface below, exciting NASA of what possibilities lie ahead for its beloved Perky.

'This shot from a camera on my 'jetpack' captures me in midair, just before my wheels touched down,' NASA shared in a follow-up tweet.

Minutes after Perky began rolling around Mars, it snapped a picture of its wheel surrounded by the dusty landscape using its 20 megapixel color camera.

Adam Steltzner, the chief engineer on the project, said Perseverance is an 'epic effort' that represents eight years and 'over 4000 human years of investment and the latest images shows that the work has paid off.

The sky crane maneuver is the final landing stage that was used when Curioisty landed on Mars in 2012.

The detailed images shows the long Nylon cords lowering Perseverance to the Martian surface, along with the rover's mechanics and wheels danging in the air.

Huge mystery blob found under the moon's far side